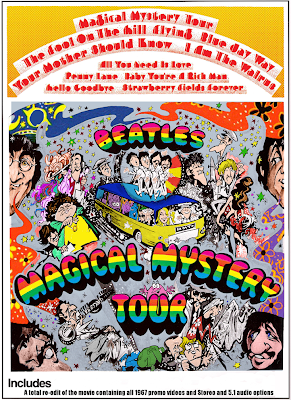 A total re-edit of the movie containing all promo videos with stereo and 5.1 audio options.

Think of it as a visual version of the Magical Mystery Tour LP, as it includes all of the songs on the LP. The film has been sourced from a professional transfer of the 1988 laser disc, which is the best visual source of the film available. All of the Beatles 1967 promo videos are included into the film, and the makers assures us that each promo fits perfectly and adds to the story and overall experience of the film. The whole film has been resequenced, and reimagined. The best mixes of each song were chosen for this project, sometimes created from two different mixes. The song "Death Cab For Cutie" is taken from the 2007 digital remaster.The dialogue and incidental music in the film is a combination of the three available mixes (original mono/1988 mix/MPI DVD mix). There is different audio on each of the mixes, and when combined you finally hear everything in full dimensional stereo. A 5.1 mix is also included that puts you right on the bus !